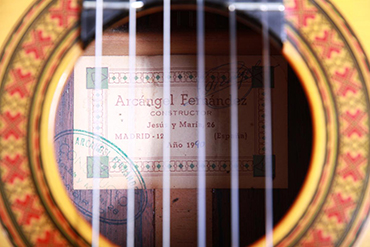 London Guitar Studio are lovers of all things flamenco, and one of the best Spanish luthiers of flamenco guitars in latter half of the twentieth century was Arcangel Fernandez.

Born in 1932, he initially pursued a career in cabinet making. However, in 1954 he met the great luthier Marcelo Barbero who was considered to be the finest maker in Madrid and was former assistant to Santos Hernandez. Fernandez became Barnero's assistant and as a result Arcangel Fernandez came to have an inspirational and highly significant master. Fernandez, working with Barbero, contributed to the construction of instruments by preparing wood and dealing with the finishing touches. 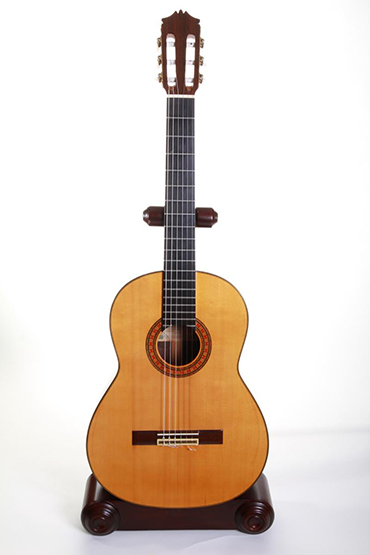 The master and the apprentice

Barbero and Fernandez are similarly towering figures in the world of flamenco. Arcangel Fernandez's work as a guitar maker has been at the centre of what it is that has defined the archetypal flamenco guitar of the modern era. It was very much a case of Barbero passing on the torch, as Fernadez had not completed a guitar himself until Barbero's death in 1936. It was at this point that Fernandez was able to take on many of the projects which Barbero had been working on before he died. After completing these instruments, it was then time for Fernandez to begin crafting his own guitars from scratch. With the permission of Barbero's widow, he got to work in what was Barbero's studio and began to put all his learning from the great master into action.

Having began making his own guitars, it was then on to the business of the selling them. Fernandez established a shop in conjunction with Manuel Rodriguez, though Rodriguez later left to live in Los Angeles. The shop featured Fernandez own work together with some instruments by other talented and exciting luthiers. Things then came full circle in a fortuitous and rewarding way. In 1959 Arcangel Fernandez was joined by Marcelo Barbero's son Marcelo Junior and the two men worked together for 40 years.

Fernandez's reputation quickly spread and he came to be considered one of the greatest Flamenco guitar makers in the world. Later in his career Fernandez, who produced an average of eight guitars each year, eve had to stop taking orders for his instruments as the waiting list had become too lengthy and he eventually retired to the Canary Islands.

His work remains in incredible demand but is rarely available as so many of his instruments were purchased by Japanese collectors. Indeed towards the end of his career Fernandez was working exclusively for overseas clients as interest in Flamenco had subsided in Spain. Today, his beautiful creations are revered and he is held in high regard for what he was able to achieve in this field of music instrument making. If you are a fan of flamenco, then you will get a lot out of learning about Fernandez, let alone getting hold of one of his exquisite guitars.

We are truly proud to be able to have had some Arcangel Fernandez guitars in stock over the years. It is always worth checking back in to our Arcangel Fernandez collection to see whether we have one of his beautiful guitars in store at the moment. They are first and foremost an absolute pleasure to play, but also an honour to own. Offering at once an unmatched playing experience and a unique slice of musical history, these guitars crafted by Arcangel Fernandez are one of a kind.

His guitars from the mid to late 20th century still offer a dynamic, thrilling response. There is a powerful, booming quality to the sound of his guitars. On top of this, you will find in Fernandez guitar that there is plenty of richness to be found in the basses and a striking sharpness and melody to the trebles, which sing out in the most glorious fashion. Whether you are a performer or a collector, an Arcangel Fernandez flamenco guitar is a very valuable thing indeed.

We are very sorry, but the browser you are visting us with is outdated and not complient with our website security.

Please upgrade your browser to a modern secure version to view our website.